The Lenovo Chromebook Duet 5 also known as the IdeaPad Duet 5 is a new 2-in-1 Chromebook.  It has a lot of features that is drawing the eyes of the people. It includes a detachable keyboard and stands. It is a new feature that had not been seen before the present time. There had been a claim made by Lenovo regarding this too.

Lenovo very proudly and strongly claims that this is the “world’s first detachable Chromebook with an OLED display”. We have taken a look at the supposed screen and we must say that it looks quite good and cool. It is indeed something that you can spend time on, thinking about buying it. 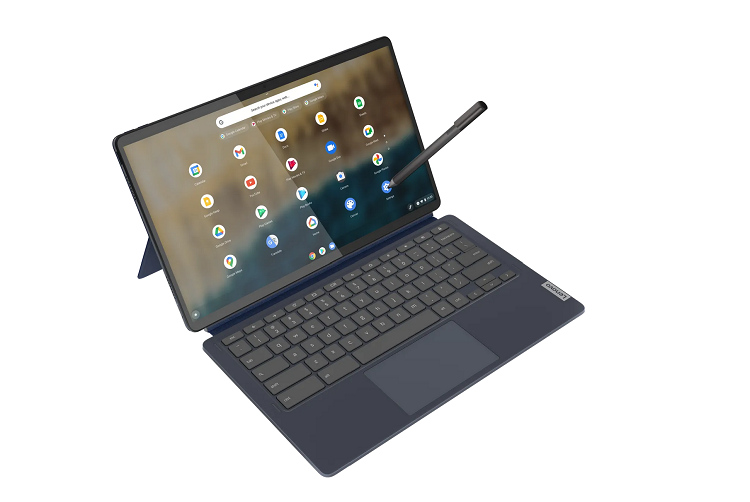 However we must make it clear that it is a follow up of the original Lenovo Chromebook Duet. This though has a lot of wide-ranging upgrades. The best upgrade is obviously the 13.3 inches full HD OLED display.

It is the star of this show alright. The content of the pictures and images on the screen should be immaculate because it is supposed to be capable of 100 % DCI-P3 color gamut. So if they are not exaggerating then this will give a beautiful display.

The OLED technology is also very good. They will prevent or reduce 70 % of the blue light which is harmful to the eyes. Technology is going to help people too. This had been made common knowledge by the company so that people can fully appreciate the beauty of the OLED technology.

On the inside of the Chromebook there are a lot of other components and features that needs to be mentioned. There is the Duet 5 has Qualcomm Snapdragon 7c Gen 2 system on a chip (SoC), up to 8GB of LPDDR4x memory, and up to 256GB of eMMC storage.

Connectivity is also very good and it is going to includes Wi-Fi 5 and Bluetooth 5.1. It also has the feature of two USB-C ports. This is mainly for charging and can be also used as a headphone jack. It is also going to have a quad-speaker array with an “amplifier” for video calls. Even after all this, there will be as well as USI stylus support.

So if you are interested in buying a Chromebook then you should go for this one. It is jam-packed with features and that too at a very reasonable price. So go for it!