The Phoenix Suns won Game 2 of the NBA Finals, 118-108, over the Milwaukee Bucks on Thursday night in Arizona, behind 31 points from star player Devin Booker.

With this victory, the Suns are now two wins away from winning the franchise’s first NBA championship. 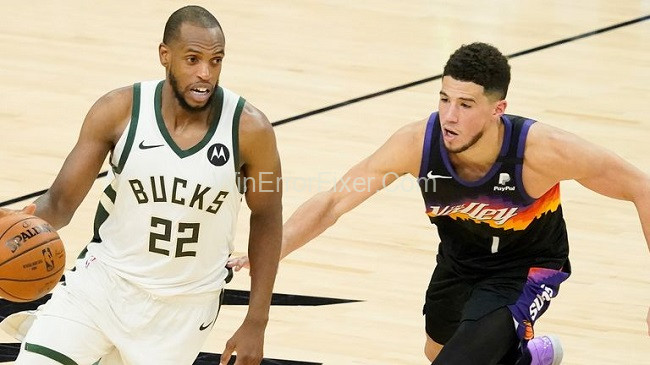 On Sunday night, at Fiserv Forum in Milwaukee, we’ll play Game 3. Despite falling behind by nine points with over halfway gone in the first quarter.

The Suns rallied to win the game in the last minutes of the second. The Suns would go on to lead by double digits for most of the third and fourth quarters.

With 4:39 remaining in the first half, Booker drained a jumper from 22 feet out to give Phoenix the lead for good.

Suns fans can watch Games 3 and 4 of the NBA Finals on Sky Sports this Sunday and Wednesday night as the team travels to Milwaukee in search of the franchise’s first NBA championship in 53 years.

The Suns took an 11-point advantage into halftime and kept the Bucks at bay for the remaining 24 minutes, en route to their eighth win in 10 home games this postseason.

After a Brook Lopez basket pulled Milwaukee within 93-88 with 8:45 remaining, Deandre Ayton converted a Chris Paul assist into a layup, and Booker buried a three-pointer to swiftly restore a double-digit lead for the Suns.

Booker made another three-pointer, extending the lead to 13, but the Bucks stayed in it. Milwaukee closed to within nine points with 5:15 remaining.

After a 7-0 run fueled by Jrue Holiday and Giannis Antetokounmpo, but Chris Paul answered with a three-pointer that extended the lead back to 103.

Devin Booker squared up to Milwaukee Bucks forward Khris Middleton with a jab to the right.

Booker didn’t hesitate before rising into his shooting pocket and sinking a contested three-pointer, restoring a 10-point advantage for the Phoenix Suns.

We anticipated such a response to the play. The noise level at Phoenix Suns Arena was comparable to that of a pride of lions.

Isiah Thomas, a future NBA Hall of Famer, jumped up from his place in the press section, shook his head, and said, “Wooo!”