On Sunday, the NYPD released graphic footage of the stabbings that occurred on Saturday at the Museum of Modern Art and identified the lone suspect who remains at large.

Police said 60-year-old Gary Cabana vaulted over the counter at a W. 53rd St. movie theatre when his membership to a famous Midtown museum was revoked.

There is video of him repeatedly stabbing a 24-year-old man and woman who were working behind the desk as they ducked for shelter. 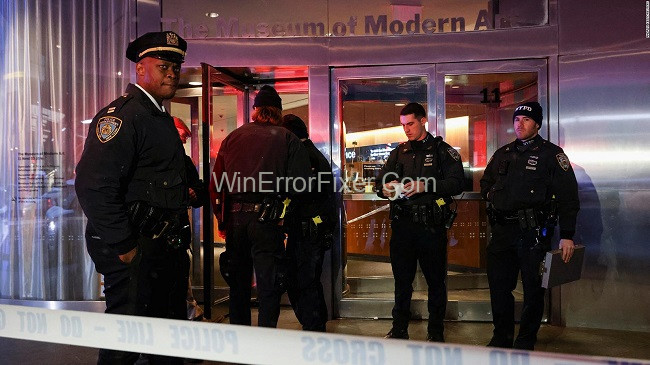 Another man, who looks to be a security guard for the museum, ran furiously along the counter, pointing at the attacker and throwing items at him.

Both victims escaped and were taken to Bellevue Hospital, where they are now in stable condition.

The Museum Claims he Made Frequent Visits From Time to Time

The cops claim he was a regular museum visitor. Within a short time of the occurrence, the police described him as wearing a black jacket and a medical mask.

As soon as that description was disseminated over division radio units in the region, police responding to the spot reportedly began combing the area, according to John Miller, the commissioner of intelligence and counterterrorism.

Authorities were able to trace his movements thanks to a surveillance camera that caught his escape from the museum.

Miller further mentioned that prior to the double stabbing, Cabana was wanted in connection with two crimes in the same Midtown Manhattan neighbourhood where the museum is located.

Authorities believe he may also be linked to a Monday night fire that was extinguished on the fifth floor of a Best Western in Philadelphia.

On Saturday, after being briefed about the incident, New York City Mayor Eric Adams said it “appears to be an isolated, criminal crime,” according to a tweet from the mayor’s press secretary.

Both victims required medical attention, but thankfully their wounds weren’t too severe. On Saturday, the museum was evacuated for a time because police thought the attacker was still inside.

However, they later revealed that security footage had actually shown the man exiting the facility.