Even though it may come as a shock, understanding why this has occurred is essential to correcting it. It’s important to understand what this iMovie error number means first.

If you receive an error code 10008, it means that iMovie is unable to render your edited video for a variety of reasons. 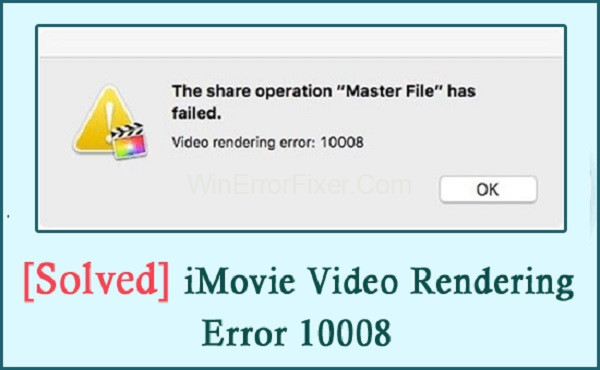 iMovie’s rendering problem 10008 can be caused by a variety of factors. The following are a few of the most frequently encountered:

You may need to combine several short movies taken at various points in time in order to make a longer video in some cases. This can happen if some of the short videos have a file format that differs from that of the other short videos, resulting in a corrupted combined file and an iMovie error. Even though the majority of short video clips are in the MP4 format, an effort to export a final merged file will fail if at least two or three of them are in MKV format.

2. Improperly Importing or Changing the Location of Video Clips Might Lead to Errors.

You must first import a video file into iMovie before you can begin editing it. It is possible that the edited movie will produce iMovie video rendering error 10008 if the video has not been loaded entirely into the programme. Error 10008 can also show up after importing the video into the software and after changing or deleting the original file from its original place.

3. The Files Used in a Project may be Corrupted.

iMovie will throw an error code of 10008 if the original video files used for editing are corrupted.

iMovie video rendering issue may happen if your computer does not have enough free disc space to save the output video file.

To correct video rendering errors, consider updating iMovie, lowering the video resolution, or fixing corruption in the video file, among other things. To make things easier, let’s go through each item one by one.

1. Do not Change the Location of the Imported Video

Your imported videos will be found in the same spot in iMovie. This means that any video files you’ve imported into an iMovie project shouldn’t be deleted or moved. Such files will be considered corrupted by video editing software and will cause iMovie export failure or rendering error.

2. Secondly, Download and Install the Most Recent Version of iMovie.

Check to see if updating and restarting iMovie fixes the problem. Rendering error 10008 may occur if an earlier version of the application is used. This is due to possible runtime faults. iMovie can be found in the Mac App Store. The update button next to iMovie should be clicked. Your computer is updated with the latest version of iMovie.

3. Make Sure there is Enough Storage Space for the Exported Video to be Saved.

Make sure you have enough space on your hard drive to export the video. If this is the case, you’ll need to find a directory (or partition) on your hard disc large enough to hold the iMovie video file. Instead, make some room and retry your search.

4. No Mixed Video Formats Should be Used in the Project.

All video clips that are used in a project should be of the same format. A video rendering issue can occur in iMovie even if just one of them is different. After the video files have been converted to a common format, the video can be rendered. There should be no need for the mistake 10008. Use the MP4 format for all video clips, for example. It’s possible to get an error message while exporting an iMovie video if the clips are of different formats like MOV and MKV.

5. In Order to Speed Up the Rendering Process, Reduce the Video’s Resolution.

Repairing corrupted media files of any type, such as MP4, MKV, MOV, etc. is a one-stop solution using Stellar Repair for Video Errors and damage can be easily removed from short or long video files using this software, which is compatible with both macOS and Windows.