A lot of people reported that the Taskeng.exe window shows up every now and then. Depending upon the situation, users at times see a short message that says that a certain executable couldn’t be found or see an empty Taskeng.exe window. 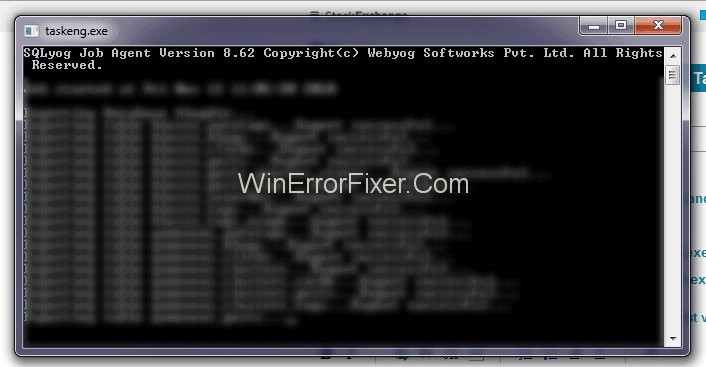 There are numerous potential reasons that can trigger the Taskeng.exe error. Given below is a list of the most common occurrences:

1. Some other program removes or modifies the files that Taskeng.exe uses some times.

3. An ill-intended malware, ex: Trojan Horse, has camouflaged itself as the Taskeng executable.

Similar to every other system files with enhanced permissions, Taskeng.exe is also one of the perfect disguises. These executable targets for harmful malicious programs developed by cybercriminals. Although a random pop up can easily be some pre-defined process that has been scheduled to run automatically, it can also be a sign of a virus attack.

Whatever the case is, popping up of a blank black Taskeng.exe window is unusual behavior. Either some malware infection or a corrupt registry causes this error.  Malware infections such as Trojans specifically target processes like Taskeng.exe to evade anti-malware detection.

Generally,  the Taskeng executable is linked with a number of errors but the most frequent culprits are Rocket Tab and My Web Search (it is a nasty browser hijacker). Both of these programs are bundled with ad- supporting programs like Trovi Download and a few others that thrive on illegitimate practices.

Although there is much malware that has been confirmed of targeting Taskeng.exe, the modus operandi is always the same. If this malicious file finds its way inside your system, it will instantly attack the Windows Run and Run Once keys. The security experts have explained that those key possess some registry values in them. These values are set to run Taskeng.exe error at fixed intervals or at start-up.

The majority of the time, we try to stay under the security radar. But the virus induces ad pop-ups and various other advertisements. However, this is not the only thing that the virus does. There are various more aggressive versions of the malware type which will perform one or more of the activities given below:

1. Gather information (keystrokes, shopping habits or personal info) and then send the data to a third-party host.

4. Slow down the computer by using the system’s resources in order to mine data.

How to Determine If Taskeng.exe is a Virus

Error message is the biggest giveaway that affects the Taskeng.exe. There is a blank Taskeng.exe pop up along with an error message, such as “Windows cannot find *executable file*”. If it occurs, then it is highly likely that you have encountered a virus infection. Another sign to be sure of this is if you see a mention of Genius Box or Rocket Tab or MyWeb Search in the error message.

In case you see a message similar to this then there is still one more verification to make before determining that the system has been infected by a virus – The location of the legitimate Taskeng.exe is c:\Windows\system 32.

Press the Ctrl + Shift + Esc key combination to open Task Manager and then going to the Processes Tab, to check if the reason is the same. Once there, find Taskeng.exe and them check Command-line associated with it. You can right-click on it and click on Open File Location.

In case, you see that the path is c:\Windows\System 32, then the source of the virus infection is identified. So, navigate down to the methods to get rid of the virus.

This guide contains a collection of methods that successfully helped users, suffering from random Taskeng.exe pop-ups in order to get rid of the problems. Follow Method 1 and Method 2 if you have previously determined that c:\Windows\System 32 is the location of the process Taskeng.exe.

Step 2: Then type taskschd.msc and then press the Enter key to open Task Scheduler.

Step 4: Widen Name column in the center pane and then locate User_Feed_Synchronization entry, followed by a couple of digits.  Click on the task and then click on the History Tab below.

Step 5: If the pop-ups are caused by this particulate problem then you will see a list of dates and times along with error reports. If it is so, then proceed to the next step. But if the list is empty then move to Method 2.

Step 6: In case the history list contains error reports, click on the Disable button present on the rightmost pane.

If this method didn’t resolve this issue then follow the next method.

A lot of users who encountered this issue traced the odd behavior to the Microsoft Office- Apparent. There is a Get Office icon that auto-installs and ends up causing this issue.

Step 1: First of all, Press Windows + R key combination in order to open the Run window.

Step 3: Right-click on the Task Scheduler Library present on the left pane, expand View and then enable Show Hidden Paths.

Step 4: Now, click on the little arrow present next to the Microsoft folder and then double click on Office in order to see the entries that are associated with it.

Step 5: Select the Office Background Task Handler Registration and then use the right pane to click on the Disable button.

Solution 3: Scan your system with Malwarebytes

You are previously determined that you are dealing with some malware problems. Here is an appropriate measure to get rid of this infection. It could be done in a number of ways, but the infection possesses the tendency to spread to other system files. So, deleting the Taskeng.exe is not really applicable. This is the reason we recommend to run a system-wide scan using a powerful Antivirus suite.

Most of the security products can deal with an infection like this. But a lot of users have reported false positives regarding this issue. In order to minimize this risk let’s use a method that proved to be successful for the majority of the users. while dealing with this problem.

Malware bytes is highly effective in dealing with viruses and Trojans. It is, in fact, the best security software when it comes to removing browser hijackers and adware. Download Malware bytes from its official link and then install it. Once it has been installed, open it and then click on the Scan Now button.

All the threats present will be automatically quarantined after the scan is finished. Now, restart the system. you will find that the Window will recreate Taskeng.exe automatically. along with all the other system files that have been affected by the infection.

This guide contains all the most effective and easy methods to tackle Taskeng.exe Keeps popping up the issue. Read the guide carefully and select the method useful for your situation. Follow the methods with an alert mind. Hope this guide proved useful for you.