It was reported by ESPN on Monday that Rachel Nichols, who had been slated to serve as ABC’s sideline reporter for the NBA Finals.

She will not be present for the series’ opening game on Tuesday night. Malika Andrews will take over for her. 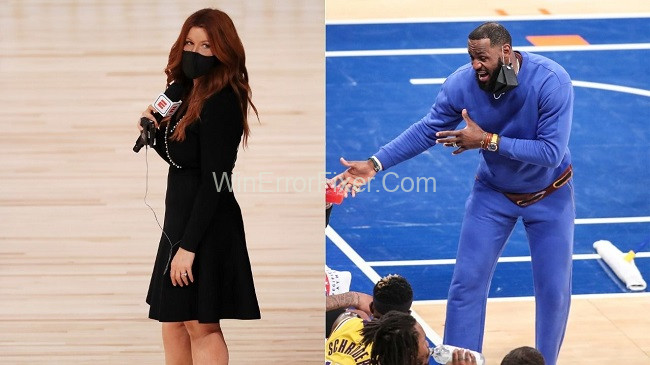 Last year’s NBA Finals and this year’s most pivotal ESPN NBA games both have Nichols as their sideline reporter. Disney owns the ABC television network and ESPN.

In a statement, ESPN said, “We believe this is the right option for everybody concerned in order to keep the focus on the NBA Finals.”

Although ESPN had indicated in October 2019 that Nichols would be hosting the NBA Finals, Taylor, who is Black, ultimately got the job and Nichols made the racist comments.

The newspaper secretly taped a phone call with Nichols without his knowledge, and he said, “I wish Maria Taylor all the luck in the world – she covers football, she covers basketball.

You can offer her more responsibilities if you feel the need to alleviate the pressure you’re under to improve your organization’s longstanding track record on diversity.

Which, by the way, I can attest to firsthand from the perspective of a woman. You should look for it somewhere else. You won’t get it from me, and you can’t have what I have.

When Nichols hosted “The Jump” on July 5th, the Times stated that the show’s crew was upset with him, so he apologised.

Taylor’s ESPN contract was slated to expire in less than three weeks prior to the story, and she had already turned down an extension.

Nichols Was a Sideline Reporter

Nichols has reported from the courtside for ESPN’s coverage of the NBA Finals and other major games this season. Disney owns the ABC television network and ESPN.

The New York Times reported last year that Nichols, who is white, made racist comments to another reporter, Maria Taylor, who is black. This led to the decision to replace Nichols with Andrews as the sideline reporter.

According to Nichols, ESPN was “feeling pressure” regarding diversity when they chose Taylor to host the N.B.A. finals last year.

Due to the recent revelation of statements Rachel Nichols made about her ESPN colleague Maria Taylor a year ago, she will not be attending this year’s NBA Finals as a sideline reporter.

After learning in July 2020 that ESPN commentator Maria Taylor, who is African-American.

Would be hosting coverage of the 2020 NBA Finals, Nichols vented her dissatisfaction to LeBron James’ advisor Adam Mendelsohn.