DK Metcalf, a star player for the Seattle Seahawks, admitted that the speed he faced in the 100-meter sprint at the USA Track.

And Field Golden Games and Distance Open on Sunday wasn’t something he was prepared for after playing in the NFL. 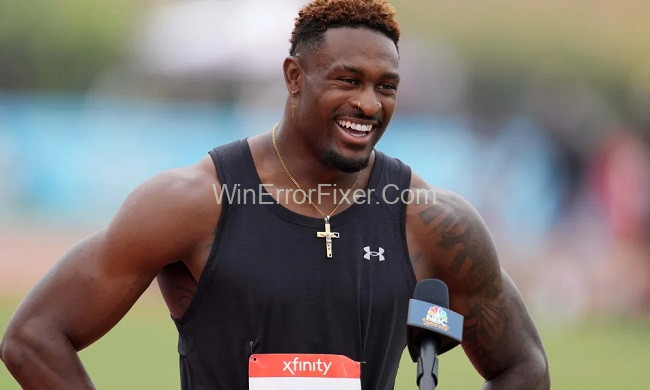 With a timing of 10.36 seconds, Metcalf finished dead last in his preliminary heat. According to his post-race interview, “running in a competitive event signifies something quite different than football speed.”

Metcalf’s performance was remarkable despite the result. He lacked significant training as a sprinter because he didn’t participate in track and field at Ole Miss.

Furthermore, the 2020 Pro Bowler’s 6’4″, 235-pound size made him tough to ignore. Whether or not Metcalf made it to the final heat on Sunday, he may have simply intended this to be a one-time thing.

Now that he is 23, he has a better chance of making a serious bid to compete in the 2024 Summer Olympics in Paris.

About Two Dozen Olympic Sprinter Have Played in the NFL

There have been roughly two dozen Olympic sprinters to play in the NFL, the most famous of whom is “Bullet” Bob Hayes, who won two gold medals while playing for the Dallas Cowboys in the 1960s.

Furthermore, athletes seldom make the transition from track to football. It’s not often that two circles in a Venn diagram meet each other exactly where they should.

Extremely infrequently does the fuzz of blur become clear. Metcalf’s highest speed during his pursuit of Baker on “Sunday Night Football” in October of last year was determined by the NFL to be 22.64 miles per hour.

Which is impressive until you consider that Usain Bolt, when he broke the world record in 2009, averaged close to 28 mph.

To say Hill was surprised would be an understatement. The 100-meter dash was a distance that Metcalf had never before attempted.

Training a football player to become a sprinter and competing against the quickest persons in the United States for a spot on the Olympic team would be a massive undertaking.

However, Metcalf has always been a speed demon on the football field. NextGen Stats show that in Week 7 of the 2016 season.

Metcalf was going at 22.6 mph while chasing Baker, having started around 10 yards behind, covered roughly 90 yards, and flashing past five other players.