Celebrating 50 years of women running the Boston Marathon, defending Olympic champion Peres Jepchirchir had the best finish of all time.

On Monday, the world’s oldest and most renowned annual marathon resumed to its traditional spring start for the first time since the outbreak of the coronavirus epidemic. 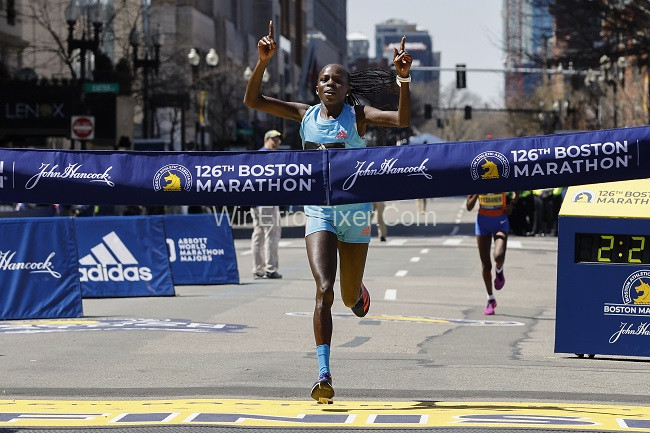 The 28-year-old Kenyan won in a see-saw sprint down the stretch. Jepchirchir and Ababel Yeshaneh of Ethiopia switched positions eight times in the last mile of the 50th anniversary.

Of the first official women’s race before Jepchirchir finally pulled ahead on Boylston Street. She finished in 2 hours, 21 minutes, and 1 second.

With around four miles to go, Evans Chebet separated himself from Gabriel Geay and went on to win his first major marathon in 2:06:51, making it a clean sweep for Kenya.

The 125th Race Was First Postponed and Then Called Off

Due to the pandemic, the 125th race was initially postponed and then cancelled for the first time since the event’s inception in 1897. The 2021 event was pushed back to the month of October.

For the past 50 years, the event has been commemorated by Nina Kuscsik’s status as the first official women’s winner, and this year marked that milestone.

(Bobbi Gibb, who ran in 1966 with the unauthorised runners known as bandits, was the first woman to finish the marathon.)

Sixth-place finisher Valerie Rogosheske in 1972 revealed that she had intended to run the race as a bandit while hiding in the bushes until women were given the green light.

In addition to competing alongside her daughters this year, she also served as the ceremonial starting gun for the women’s elite division.

“A collective sense of “Man, we’re going to accomplish this” emerged. Nobody is allowed to withdraw from the programme.

There are people watching us “Monday morning at the starting line, she remarked. “A lot of people thought it was ridiculous that we were training for a marathon.

That’s why we knew we had to push ourselves, but also that this marathon presented a great opportunity.”

On Monday, the Boston Marathon returned to its regular Patriots’ Day slot on the schedule for the first time.

Since the start of the COVID-19 pandemic, and Peres Jepchirchir celebrated the 50th anniversary of the women’s division by winning a see-saw dash down Boylston Street.

The defending Olympic champion and Ethiopia’s Ababel Yeshaneh ran side by side for the majority of the race.

Exchanging the lead eight times in the last mile before Jepchirchir finally pulled ahead in the final 385 yards to secure the victory.

The Kenyan won by a razor-thin margin of four seconds, clocking in at 2 hours, 21 minutes, and 1 second.