Ntoskrnl.exe High CPU, Disk Usage on Windows 10: By the term Disk Usage, we mean the portion of computer storage that is currently used. CPU usage tells us how much of the CPU is used by a program or a process — continuous high CPU usage results in a problem in the functioning of the programs. Ntoskrnl.exe process also consumes so much of disk space. 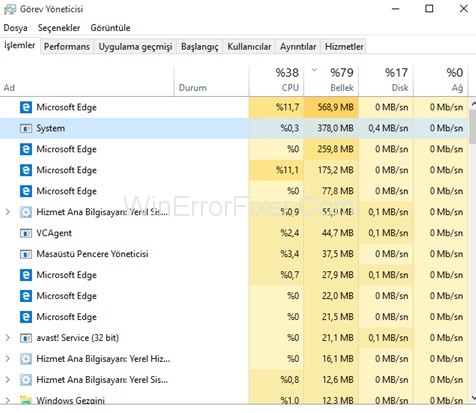 What is Ntoskrnl.exe and What Does It Do?

Ntoskrnl.exe stands for Windows NT operating system kernel. It is a system application file. Mostly, this process runs in the background of your system. It is responsible for system-related processes like process and memory management and hardware visualisation.

Ntoskrnl.exe also compresses the old pages of memory. It results in a reduction in the overall amount of memory to be used. It also contains the scheduler, security reference monitor, memory manager and the cache manager. Ntoskrnl.exe is a protected system file. Due to this feature, it cannot be easily corrupt or deleted.

Reasons for Taking Ntoskrnl.exe a lot of Disk Space, Memory and CPU

If your system is continuously running slow, you can suspect Ntoskrnl.exe High CPU or Disk Usage on Windows 10 issue. Memory leaks caused by hardware and malware are the main reason behind this consumption. There are some other reasons as well. Let us discuss some of the reasons here.

Malware harm your computer badly. They can sometimes embed themselves into the ntoskrnl.exe file. Also, malware can hijack the functions of this file and cause a memory leak. A virus also can write itself into the space of ntoskrnl.exe.

Both these fill your memory space. In turn, more CPU resources are used. So, when ntoskrnl.exe detects so much of memory usage, it is unable to handle it. Such problems like blue screens are generated.

While communicating with different devices, ntoskrnl.exe sends and receives data with the help of device drivers. That data is then written into RAM, and there is a wait for execution.

Corrupt drivers keep on sending data continuously to the ntoskrnl.exe memory handler. It results in a memory leak. These drivers also rewrite data in the memory space of ntoskrnl.exe. So is fills all the space of RAM. So more CPU usage is required for processing this data.

In Windows 10, a new feature called the compression store is introduced. It contains all compressed pages. When there is a load like situation, the memory manager compresses the pages.

It doesn’t write them to the disk. It results in a reduction in the amount of memory used per process. So Windows can store more applications in the memory space. Sometimes, this compressed store uses more resources. You can view the usage in the task manager.

Usually, the ntoskrnl.exe file is well protected. There are very rare chances that it gets corrupted. But if it is corrupted, then ntoskrnl.exe doesn’t work properly.

It gets confusing when to write into RAM and when to free its space. So it results in extra load on the CPU. It may also be the reason that your Hard Disk is filling up so fast.

Fix: High CPU or Disk Usage by Ntoskrnl.exe on Windows 10

After diagnosing the issue, the next step is to solve it. Here we will discuss some of the solutions to fix Ntoskrnl.exe High CPU, Disk Usage error. Apply them, in case you encounter this issue. The fixes are listed below:

The incompatibility between the operating system and drivers also causes Ntoskrnl.exe High CPU or Disk Usage on Windows 10 issue. So try to update your drivers. Here are the steps:

Step 1: Press Windows + R keys from the keyboard. Type hdwwiz.cpl and click on the OK button.

Step 2: Navigate to the Drivers tab. Click on the Update Drivers option.

Step 3: Choose the automatic option. It will find and update the drivers from the internet.

Solution 2: To Run Antimalware and Antispyware Software to Scan the System

Malware can create various problems on your system. High CPU or disk usage is also one of them. To resolve Ntoskrnl.exe High CPU or Disk Usage on Windows 10 issue, you can perform a full scan. If there will be any malware present in your system, it will list them.

You can also use Windows Defender for this purpose. This software protects your system from viruses, spyware, and other security threats.

Runtime Broker is a Microsoft Windows process. It has poor memory optimisation features. Due to this, it consumes a lot of CPU usage. One solution is to disable the Runtime Broker. Follow the given steps to do so:

Step 1: First of all, Go to the Start menu. Open the Settings.

Step 3: Disable the option saying “Get tips, tricks, and suggestions as you use Windows” and “Get notifications from apps and other senders”.

Step 4: Restart your computer and see if the issue resolves or not.

A registry is the collection of databases of configuration settings of Windows OS. It stores the settings for software, hardware, operating system configurations etc.

You can change these settings with the help of the Windows Registry Editor. Apply the following procedure:

Step 5: Find “ClearPageFileAtShutdown”. Then, double-click on it.

Step 6: Change the Value data value to 1. Click on the OK button.

Now check if the ntoskrnl.exe process’s CPU usage is controlled or not.

In The Dark Season 3 Release Date, Cast, Plot and More