The Spanish language has the same alphabets as in English, but there is some extra alphabet like Ñ/ñ. The N/n letter with a tilde on top of it is different from the English alphabet letter N/n. It is also pronounced differently.

The tilde on the top of the letter N is an accent mark that makes the N letter different and gives it a Spanish accent. This letter comes in many commonly used Spanish words. For example, Espiña, Baño, Puño, and many other words in which, this type of N is used.

Now, it is important to know how to add this tilde on top of the N/n letter. If you are having a Spanish keyboard then you don’t need to learn this thing. But in case you are in America or other countries, and you have a normal keyboard then this article is going to be helpful.

Here you will learn how to type the N/n with tilde in different documents of various devices. Along with that, you will know some shortcut keys to do this. Let’s take a look at this informative article…

How To Type Spanish n In Windows (using Alt Code)

In any document of Windows, you can easily type the Spanish n by using shortcut keys. Although, there is the option for adding this letter through the Insert  > Symbol option. This is going to be more time-consuming. Through this simple shortcut, you can quickly add a Spanish n to your document. For this, you need to use the Alt key and some numerical keys. 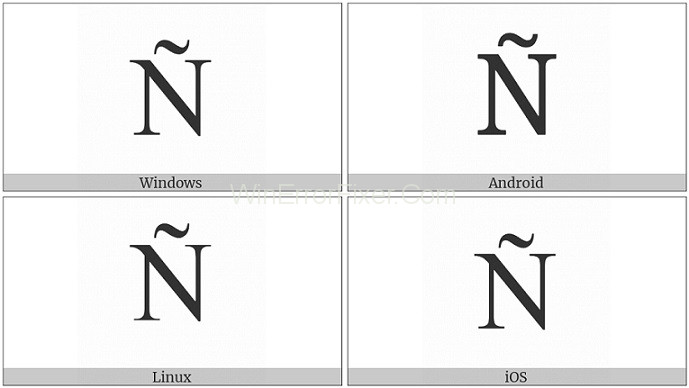 Press and hold the Alt key till you have completely typed the numerical numbers that are 0241 or 0209. Once you do this you will see a Spanish n letter on your window’s screen. The other alternative keys instead of using the numerical keys are NmLk.

And make sure that you will correctly use these keys as mentioned. The numbers are known as alt code, which is different for uppercase and lowercase Spanish n.

How To Type Spanish n On Mac (shortcut)

Mac book has some different keys on their keyboards. That’s why you have to use different keys to type the Spanish n. One way is by pressing the n key for a few seconds until a popup box will appear. In that box, you get all the possible accent marks with the n letter. So, use that n letter with a tilde mark on top.

The other alternative way is pressing the n key two times along with the Option key on the keyboard. Or you can also do this by pressing the Ctrl key with n, as a result, the tilde symbol will appear then press n for Spanish n.

How To Type Spanish n With Tilde In Word

Word is the best and most widely used software of Microsoft for editing and creating documents. Everyone uses Word software to type the content and other work. While you working on a word document many times you can use shortcut keys to do the work quickly.

The shortcut key for typing Spanish n is Ctrl+Shift+Tilde key (~) with n or Ctrl+~ with N. The tilde key (~) is available in all keyboards just below the Esc key. So, use these shortcut keys to type n with tilde for Spanish document work. When you are going to press Ctrl and Shift key, always remember that you will press both the keys together along with the tilde key (~). The tilde symbol is typed only when you press it after the Shift key, otherwise, it will type a grave accent symbol (`).

Alt code is nothing but a four-digit numerical value that is needed to type a Spanish n with a tilde (~). For the uppercase and lowercase of a Spanish n, there are two different Alt codes. Like 0241 is used for typing a lowercase ñ and 0209 for uppercase Ñ. Similarly, this code is used in the case of Microsoft Windows to enter the n with tilde like a Spanish letter ñ. Alt key and the four-digit Alt code is the best and easier way to type the Spanish letter ñ/Ñ.

For laptop users, there is quite a different Alt code that is NmLk to press with the Alt key. As there are no numeric keys in some laptops, that’s why these alphabetical keys are used. In this way through Alt code and Alt key, you can type the Spanish n letter with tilde on it.

Copy and paste is the easiest way for typing the Spanish n with a tilde. In the copy and paste way, you can simply select the letter n with tilde on it. Once you select it, then press Ctrl+C to copy the text and then go to the place where you want this letter, and press Ctrl+V to paste it.

Now, using the Spanish letter ñ through a simple keyboard will be easy if you know the above ways. These are good and easy ways through which you can add tilde on the n letter to make it a Spanish character. Now, you don’t need to change your keyboard for typing a Spanish document. Because you can also use the Spanish n with tilde through the above-mentioned methods.