Atletico Madrid and Manchester City’s high-scoring second leg of their quarterfinal clash concluded in a brawl at the Wanda Metropolitano Stadium.

After the referee blew the final whistle of the scoreless contest, a big brawl broke out on the field and in the tunnel, bringing the game to life in the most unwelcome ways. 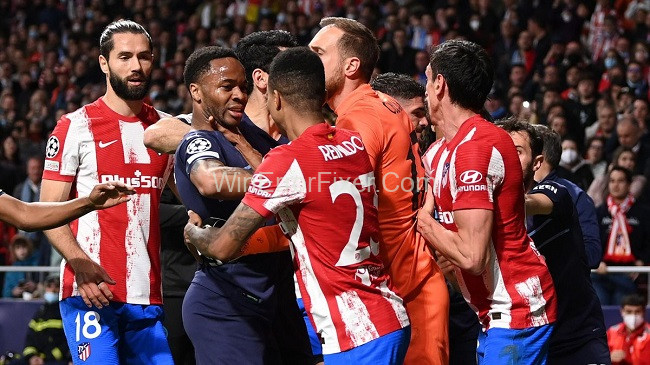 Due to their first-leg victory at the Etihad Stadium, Manchester City advanced to the semifinals.

Nonetheless, the game took a turn for the worst in the 89th minute when Atletico’s Felipe was given his second yellow card of the night.

For a sliding tackle on Phil Foden that removed both the player and the ball, prompting a consultation between the on-field and fourth referees.

Manchester City and Atletico Madrid fought to a tense 0-0 draw on Wednesday, advancing Pep Guardiola’s club to the Champions League semi-finals despite a number of skirmishes on and off the field.

After losing the first leg in England by a score of 1-0, Atletico fought furiously in the closing minutes to force extra time.

After 12 minutes of overtime, Atletico defender Felipe was ejected for collecting his second yellow card.

After Felipe was sent off for kicking out at Phil Foden, a brawl broke out in the tunnel as the teams left the field, and the police had to break it up to keep things under control.

From what we could see, Sime Vrsaljko, a defender for Atletico, threw a bottle at a Manchester City player in the tunnel before the cops intervened.

The English team refuted claims made by Atletico’s players that they wasted time in the game’s final minutes.

Pep Guardiola, coach of Manchester City, was relieved when his team won the second leg 2-1, but his words of admiration for the Spanish side did not sit well with Diego Simeone, coach of the opposing squad.