In this article, we are going to give an in-depth look at the Fallout 4 Perk Chart and S.P.E.C.I.A.L Points. So the tale begins when the only survivor of Vault III, the “Sole Survivor,” wakes up and leaves a cryogenic stasis but then finds out their infant child kidnapped and spouse murdered. Fallout 4 is an RPG set based in the post-apocalyptic wasteland of Boston, which is known as “The Commonwealth” in the year 2287.

The players have to build the traits and attributes of its character with the help of assigning whole 21 stat points to its S.P.E.C.I.A.L statistics in the initial phase of the game. These are:

The way in which the player will assign these points is going to affect how it’s a character is going to behave in various ways. The S.P.E.C.I.A.L points will also determine the perks the user can select from the Fallout 4 Perk chart. 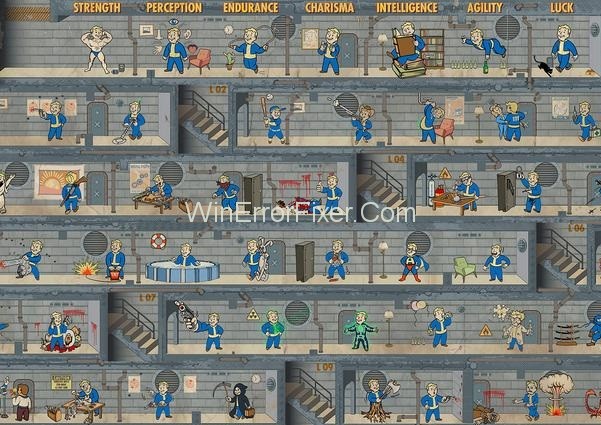 There will be two ways to increase the Base S.P.E.C.I.A.L points in Fallout 4, unlike the older installments of the franchise. First, the user is going to get one skill point that they can utilize to upgrade their character’s any one of the S.P.E.C.I.A.L attributes or can use to get one of the numerous perks from the Perk chart, every time the user goes one level up.

The player can travel with only one companion at a time. Other characters accompany the player in some of the quests too. On behalf of nature, the companions can interact with the environment for the first time.

Some prerequisites are required in order to unlock the ability to gain one Perk from the perks chart. The most common one is that the user is required to have sufficient points in their S.P.E.C.I.A.L to unlock the wanted Perk.  For instance, in order to be able to unlock the “local leader” Perk, it is mandatory to have 6 points in the charisma. All the Base skills can be upgraded max to 10.

Another way to upgrade the S.P.E.C.I.A.L stats is to obtain the corresponding bobblehead. By increasing skill points in the following attributes:

The success rate of persuasion in the dialogue is increased along with the reduced price of items during trading.

Reduced chance to get detected while sneaking along with increased max Action Points (AP).

The chance of finding ammo and caps is increased. The recharge rate of the critical hit meter is also increased.

The Fallout 4 Perk Chart has been divided into 10 horizontal layers that have one Perk for all S.P.E.C.I.A.L attributes per layer. Perks also possess multiple ranks that can be unpacked after the player has reached the required level. Perk ranks or perks which the player can’t unlock are grayed out and are required to be unlocked. Unlocked ranks are indicated by telling filled in spaces.

The requirements for the selected Perk rank are displayed at the bottom of the Window. In order to unlock one of the perks, you are required to be at a certain level. You should have sufficient points in the corresponding S.P.E.C.I.A.L attributes; for instance, in order to be capable of unlocking the first rank of “Science,” 4 points of intelligence are necessary.

Upon meeting all the requirements, you are able to unlock the first rank of the required Perk by using one skill point. To obtain additional bonuses and also to upgrade the Perk, you have to add the skill points to the same Perk till the time it reaches its limit. For instance, the Perk called “Commando” can be upgraded four times, and each time upgrades the automatic weapon damage by 20% along with a different additional power per tier.

Bethesdu Game Studios develop fallout 4. It is a post-apocalyptic Action Role Playing Game. The story takes place in the year 2287. It is 10 years after the events of Fallout 3 and 210 years after the rise of the Great War that lead to catastrophic nuclear devastation all over the United States.

After being the witness of the murder of their spouse and kidnapping of their infant son, the character or the Sole Survivor moves out into the Commonwealth to hunt down their missing child.

At the beginning phase, the player is given points to utilize on the character progression system which is called S.P.E.C.I.A.L. This system even represent statistics, namely;

Once the player has earned the required experience points to obtain a new level, they can unlock an ability. As the player will allocate more points to a statistic, they can also unlock more abilities.

The Perks can be upgraded in order to improve the Sole Survivor’s efficiency and also to further unlock abilities. In total, there will be about 275 perks to be unlocked by the player.  No level cap is present. The game will not end once the player has completed the main story.