Alia Bhatt and Ranbir Kapoor, two of Bollywood’s biggest stars, got married on Thursday in a small ceremony in Mumbai.

The ceremony was attended by some of the most legendary figures in Indian cinema. Clothing by Sabyasachi, an iconic Indian fashion business, was worn by the couple. 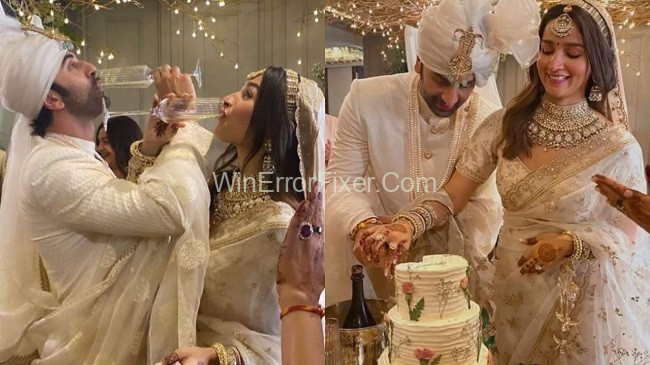 The pair celebrated their nuptials at the Vastu building, where they both live, in what has been one of India’s most talked-about celebrity weddings in recent years.

On Wednesday, the Ganesh Puja, a traditional Hindu ritual, was held at Kapoor’s Pali Hill mansion to kick off the pre-wedding festivities.

For the wedding festivities, the Kapoor family home and adjacent buildings, including RK Studios, were decorated with soft lighting. And as is traditional in Punjabi marriages, there was a Mehendi ritual as well.

Outfits for The Big Day

Alia’s golden and ivory Sabyasachi saree was a perfect reflection of her minimalist beautiful style while yet making her appear like a princess.

Instead of red, this gorgeous saree was hand-dyed in organza and featured a royal ivory colour with delicate golden embroidery.

Both the intricate tilla embroidery works and the hand-woven artistry of the tissue veil contributed to the sophisticated appearance of the drapes.

The most captivating thing about Alia “s wedding attire was the way it reflected who she is as an individual and the joy in her heart.

It was true that Ranbir Kapoor resembled a royal on his wedding day. He looked dashing as always in his custom-made Sabyasachi sherwani.

Which was crafted from embroidered silk and adorned with uncut diamonds, the designer’s trademark.

The zari-marori embroidery on the shawl was a beautiful complement to the classic white organza safa.

Alia, who wore no bridal makeup, was a breath of fresh air in a world full of overdone brides. Her refined ivory and gold saree looked stunning with her very little makeup.

Alia always sports a flushed natural appearance, and her wedding day was no exception.

She opted for a nude base with a slight pinkish glow by applying blush to her cheeks. The classic bindi and flawless makeup gave off a vibe of a trendy millennial bride.

Rather than wearing her hair in a bun, the bride went for a more natural look, her long, wavy locks falling gently over one shoulder like a cascading cascade.

The most anticipated wedding of 2022 has finally taken place, following months of media hype and conjecture.

While the newlyweds and their loved ones kept mum on most aspects of the wedding, we and the media were privy to a few insider facts.

The couple has been together for a while, but they have managed to keep it a secret. The upcoming release of their film Brahmastra, however, has put their relationship in the spotlight. Thanks for read our Article Bollywood Mega-Stars Alia Bhatt and Ranbir Kapoor Wed in Intimate.