Benchmark software helps to compare a particular product to other to do its best. It also measures the performance of hardware, software programs, computer, and internet connection. It is important to note that while comparing the benchmark, the higher the value of the results, the efficient is the software, component, or computer. Therefore benchmark software is used for multi-purposes. One is for validating software performance; the other is for selecting the best product with the comparison.

Benchmark is a test that is used to compare performance between multiple things against each other or an accepted standard. It is used to test the performance of new hardware that is to be advertised or to see a set of hardware that supports a certain amount of workload. You can measure the performance by running a particular benchmark software to test whether an installed application is compatible with your device or not. Benchmarking your network to check available bandwidth might be useful if you do not get the expected internet connection.

Some best benchmark software is here that help you to work efficiently. They are as follows:

With UserBenchmark, you can identify hardware problems and explore the best upgrades. It will test your PC and compares the users to other users with the same components. UserBenchmark offers deep testing that is used for storage drivers like HDD or SDD to stay more compatible. These not only avail individual component scores but also produce test scores for overall devices. It makes the device improve drawbacks, bugs, and thereby it becomes user-friendly.

Cinebench is considered a great benchmark, useful for finding the best CPUs for lightly threaded workloads like 3D Modeling Animation and Video editing. It gives a photorealistic appearance to the rendered scene. It is also useful for single-threaded and multi-threaded CPU performance. It is one of the most trusted benchmark software that is used in the industry.

An updated cinebench is the R20 version, which mainly concentrated purely on CPU performance. There is a limit to run a new benchmark that is called a memory limit. Cine Benchmark offers a test suite that includes both CPU and GPU(Graphical processing unit). The main aim of cinebenchmak software is to render the system’s processing power generated in 3D scenes.

Geekbench is a cross-platform benchmark that measures your system performance with the press of a button. It measures the processor’s single-core and multi-core power. It makes the system work to its potential for gaming. It allows you to compare the system’s performances, operating systems, and the processor’s architecture.

You can track your results in one place by creating an account. This will model real-world tasks and applications, which includes updated CPU workloads and new computer workloads. This reflects the actual users that face on their mobile devices and personal computers.

It is a free-ware that gathers information on some of the devices of your system like processor name, unique number, process, package, etc. It also looks after the type of memory, size, and module specifications. It is used to view all of your hardware information. It is an excellent hardware information tool for windows.

The latest version of CPU-Z offers information in android even. It also displays detailed information about battery information like battery level, status, temperature, and capacity. CPU-Z yields the information about the hardware, its optimization level, and its new versions expose additional features.

It is a hardware monitoring program that reads PC systems, voltages, temperatures, fan speed. It handles the most common sensor chips. It is a free application that reports information about android devices. It requires internet permission for online validations and billing information for measuring performances. The current value and recorded minimum and maximum values, are reported in the list of HWMonitor.

Among the software, regarding of HWMonitor tools are resource usage and privacy-oriented. It has direct control of fan speeds allowing the user to quickly customize the cooling in the system. The current HWMonitor is designed for only the interface with a specific model of mother-board. Sometimes it is incompatible.

It is a million trusted, free website since 2007. It tests the performance of the computer. Testing is an easy technique in nova bench and only takes a few minutes. It is used to compare test results online to spot critical problems. Based on the results, you can tune, upgrade, or repair your computer. It performs tests like CPU tests, GPU tests, Memory transfer speed, and disk read and write speed.

You can compare with 1000’s of similar systems and see how the computer stacks up the personality. You can save optional test results for free in a file. You can schedule, automate tests, and view temperature and battery history.

It is a benchmarking, system diagnostic, and analyzer tool. It gives more information about your need for both hardware and software. It works along the lines of windows utilities. It gives the user the ability to draw comparisons between higher and lower level performance to give information about CPU chipset, video adapters, ports, printers, sound cards, memory, windows networks.

In Sandralite software, there have an opportunity to receive feedback that to be updated and enhanced. It provides huge official hardware support through technology partners.

MSI is the best overclocking software solution for intel CPU. It works with any processor. It makes gaming applications work compatible. It has rich features for hardware monitoring and GPU overclocking.

Speccy is an informational, lightweight, and productive software that gives you detailed information about a piece of hardware in the computer, including CPU, Motherboard, RAM, graphic cards, Hard disks, optical drives, and Audio support. It gives information about detailed statistics about the hardware that is installed in your system.

It is fast and easy to navigate with speccy. You can easily scan your results as a snapshot, XML, or text file for easy sharing. This data can be accessed with the help of technical support. With this software, you can get an instant summary of your system.

Comparing PC with over a million computers is done by PerformanceTest users. It executes complex mathematical calculations involving compressions and encryptions. There comes a Passmark performance test. It compares the performance of PC to similar computers around the world. It measures the effect of configuration changes and hardware upgrades. It has an industrialized standard since 1998. 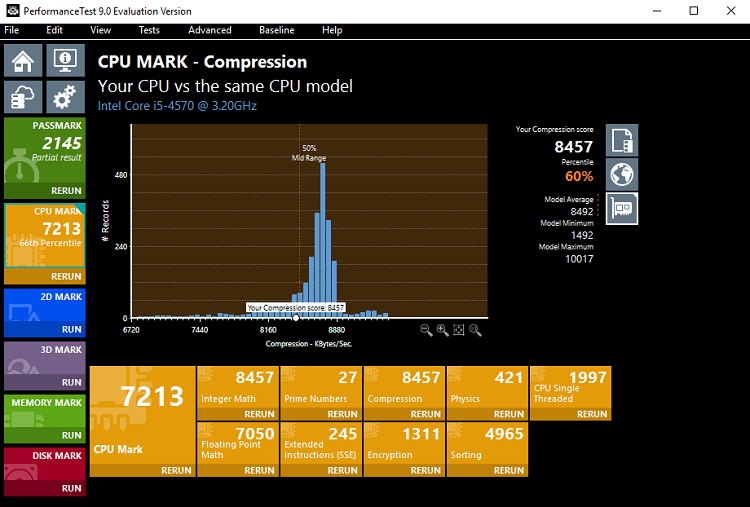 Using performance test software, you can search and download these baselines and submit your own benchmark to the site. It compares results to other websites for a variety of different speed tests.

Thereby benchmarks are useful software that provides performances report to the users that make them easy to know about the hardware. It is an appropriate method to know the systems entire configuration by a single software application.

Although it requires authenticated software for eradicating the entrance of frauds. Also, it conducts some surveys for better usage of benchmark software solutions without misuse. So we can conclude that benchmarks are continuous development applications with updated versions and serve the users drastically.